Recently I got the urge to buy an early Edison cylinder phonograph. I’d seen plenty of photos of them in the CLPGS magazines and read many articles on the subject, and was keen to actually get my hands on one, and find out for myself just what the sound quality was like.

The first thing to do was to secure a suitable player. An e-bay bid on a 2-minute Standard Edison Phonograph was successful, and a week or so later I was unpacking my un-restored 1903 vintage model: 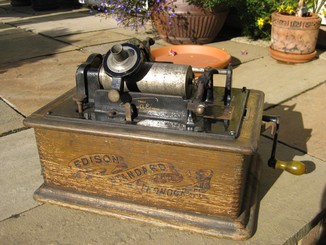 Everything was present and correct except the horn, but I knew I wouldn’t be needing one, see Part 2

Fortunately the main motor spring was still in good working order – often they are not.

The ‘Model C’ sound box was looking a bit tired, so I contacted another CLPGS member who performed a full refurb – including replacement of the diaphragm and sapphire stylus. In addition, all the metal surfaces were re-nickel plated to make it look as new:

With the sound box refurbished, attention was now directed at the cylinder carrier – which was dull and pitted. After much metal polish and elbow grease, the carrier looked a whole lot better: