Sticky Shed Syndrome (SSS) is a well-known phenomenon which can afflict audio and video recording tape. Its existance was discovered in the 1990s during routine archiving of studio tapes. Audio engineers noticed that certain tapes, especially those produced in the 1970s which used polyester-urethane binders to support the magnetic particles on the base film, exhibited binder-degradation caused by atmospheric moisture. This degradation results in the tape depositing sticky material along the tape path, including pinch rollers and record/playback heads, rendering the tape unplayable. At best, these sticky deposits can cause a ‘squeal’, and at worst they can cause the playback equipment to stop altogether, risking damage to motors etc. 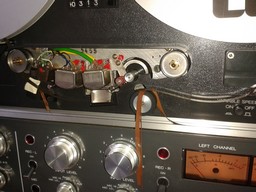 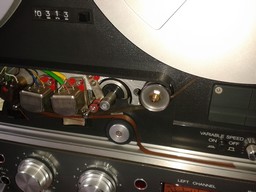 In August 1993, Ampex Systems Corporation registered a US patent (US 5,236,790) outlining the now well-known solution to SSS, which involves careful baking at 50 – 55 degrees C for a number of hours. This invaluable solution is used routinely at Audio Restored – we have a dedicated laboratory oven which holds the temperature accurately at 55 degrees C, and is fitted with an over-temperature safety cut-out.

The worst case scenario of untreated SSS can lead to the magnetic particles being stripped cleanly from the base film, as can be seen in the above photos using a sacrificial reel just for this blog – note how the clear base film layer is being returned to the take-up spool minus the magnetic oxide layer.

Moral: If in doubt, bake before the tape rolls!