Most reel-to-reel tapes that we receive for transfer to CD are found to be in perfectly good condition. Sometimes though, reels will arrive exhibiting signs of SSS – a noticeable ‘squealing’ sound as the tape is played, which is often accompanied by excessive wow and flutter and the shedding of sticky iron oxide particles on the record / playback heads and pinch roller. This is commonly due to the reels having been stored in less than ideal conditions (possibly extremes of temperature /dampness etc.) where the magnetic tape absorbs moisture from the air causing the break-down of the binder used to hold the magnetic particles onto the base film. 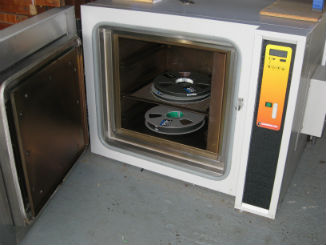 At Audio Restored, we use a ‘Carbolite’ laboratory oven supplied with the latest ‘type 301’ controller which is fitted with an over-temperature safety cut-out, to bake tapes suffering with SSS at a carefully controlled 55 degrees C for 24 hours. This technique drives out the moisture in a slow and controlled way, allowing us to retrieve and digitise the recorded content.

Be advised – never attempt to play any tapes exhibiting SSS –  it may well destroy the tape and its recorded content. Contact us to discuss a solution.

1/4 inch open-reel tapes come in many formats but generally fall into two categories: “domestic” tape and “studio master” tape. Both types can have a variety of playing speeds and tape lengths, giving a range of playing times as indicated in the table:

Domestic reels are transcribed using either a Revox B77 deck or a Sony TC-377 deck for tapes running at 1 7/8 ips.

Occasionally we receive tapes running at 15/32 ips or 15/16 ips – these are speed-adjusted using software designed for the purpose.

1/4 inch Studio tape to CD transfer is performed using one of a pair of Revox B77 professional decks, catering for all speeds from 3 3/4 ips and above in both quarter- and half- track format. Digitisation can be performed at between 16 bit/44.1 kHz (CD quality) up to 24 bit/96 kHz – just let us know your preference.

Often, tapes are sent to us that are encoded for dbx type 1 noise reduction – these are decoded using an outboard dbx 150 type 1 NR unit.

We use cookies to ensure that we give you the best experience on our website. If you continue to use this site we will assume that you are happy with it.OKRead more